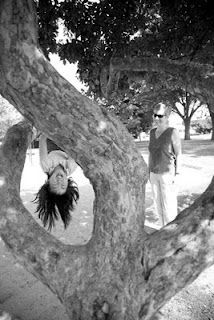 Susan Olding writes fiction, poetry and nonfiction. Her first book, the memoir-in-essays, Pathologies, was published by Freehand in 2008, and was long-listed for the BC Award for Canadian Nonfiction and nominated for the Creative Nonfiction Collective’s Readers’ Choice Award. She’s currently working on a novel.

“Is she neglectful or does she have nerves of steel? Look at that kid!” (Pointing to the nethermost branches of the tree where my daughter invariably perches.)

Writer first, mother second. Maybe because that’s the order I came to them?

My fantasies of the writing life included regular espresso dates with Mavis Gallant in a sun-dappled Parisian café. The reality has not included such outings, but she’s still alive and I haven’t given up yet.

My fantasies of mothering, in contrast, were more grounded. After all, before I became a mother, I’d already helped steer two of my partner’s kids though their teenage years. And even if I’d been inclined toward starry-eyed idealism about babies, the home study (for our adoption) would have brought me firmly to earth. We had to answer countless questions about how we’d handle conflict and discipline, what we’d do if we disagreed about parenting, and how we’d respond to our child’s questions about race and adoption.

Even so, the reality is different from what I’d anticipated.

Success for me in either realm means being there, being fully present – at the desk or with the person. It’s harder than it seems.

Schedule? What’s that? I had one, before I became a parent. Maybe I’ll have one again when my daughter’s older.

I write in shorter bursts. I steal what time I can steal. I get to work quicker when the hours are available. And I’ve written about my daughter, which obviously wouldn’t have been possible if she didn’t exist.

How aware is you child of your writing?

My daughter’s a great publicist. Whenever we meet new people she tells them about my book.

She also likes to write, and I suspect my example plays a role in that. Someday I hope we might collaborate on a project. 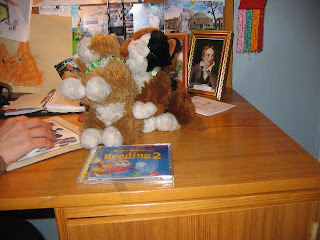 Space and quiet, yes – but also time. Books. And encouragement.

You are so lucky. Your life never lacks for meaning.

Sometimes I wish I could have started one or the other earlier, wish I could have got a head start on my writing career before becoming a mother, or could have become a parent young, so my child was fairly independent before I started to write. But mostly, I’m just glad and grateful for the incredible privilege of being mother and writer. I almost missed out on both.

For me, the early years of motherhood were a time of extraordinary focus and intensity. My daughter has some special needs and it has taken persistence to understand their nature and strength to advocate for her. It is hard to be creative when you are so driven. This dilemma became, to a large extent, my material.

Since I’m a mum by adoption, I wouldn’t know.

But bringing a book into the world does bear some resemblance to adopting a baby.

You plan and dream, maybe for years, and taste disappointment and even despair when your early efforts don’t work out. Often, you take some courses to learn what you need to learn. Your eyes go wonky from staring at the computer screen. Piles of paper litter your desk. You mail so many documents that nicer postal workers greet you by name, while the nastier ones roll their eyes and whisper to one another, “Her, again?”

The process demands patience. You do a lot of waiting. You’re completely dependent on the judgment of strangers with mysterious authority and apparently capricious tastes. Some of them don’t like you. This hurts your feelings or annoys you, and inevitably results in more paper work and more waiting.

Eventually – miracle of miracles – you get the nod of approval. And then you wait again. Sometimes you wait for very long time, so long that you almost forget what you’re waiting for. You ask your friends what it’s all about; you lean on them for assurances and praise. And finally, after months engaged in completely unrelated work, you get a call about the big day. Are you joyful? Of course. But you’re also in a panic because now you have to get ready! And there isn’t time! Despite those months and years of preparation, you feel completely unprepared.

At long last the book (or baby) appears – imperfect, no doubt, but more beautiful than you ever could have imagined. Somebody throws a modest party to help you celebrate. You show book (or baby) to old friends and new and talk about it as incessantly as you dare. Strangers admire it or think it peculiar and feel perfectly justified in expressing their opinions to anyone who will listen. Meanwhile, family members react in unexpected ways. Some become closer to you. Others issue dire warnings, or try to tell you how to handle the newest member of the family. Others barely speak to you at all.

And over time you discover that book (and baby) have lives of their own. They exist quite apart from you and your worries or your excitement or your pride, and they must follow the paths that are theirs to follow. You can’t control this. The most you can do is guide them.

I cast my historical vote for George Eliot. She may never have given birth to a child, but she didn’t let biology or her restrictive Victorian upbringing interfere with the range of her love. To her partner George Henry Lewes’s children, she became a beloved “Mutter” – someone they depended on for her warm and sagacious counsel.

My contemporary vote goes to the writer-mothers I know and love--Fiona Tinwei Lam, Rachel Rose, Jane Silcott, Judy McFarlane--and many others, whose children are now older. The ones who are sharing this journey. 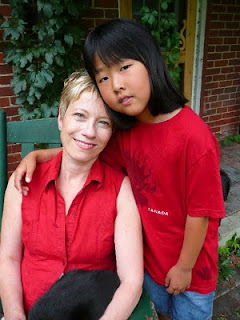 Wonderful interview! Such thoughtful answers and moments of true wisdom. Thanks so much to both of you.
Theresa Kishkan

Fantastic, Susan. The analogy between book/adoption left me with a huge smile. Thank you.

I found the book/adoption analogy spot on, too.