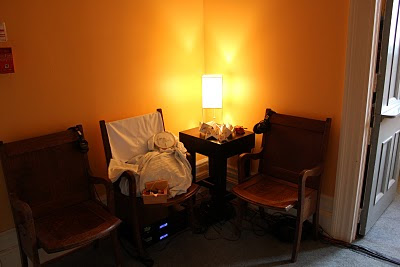 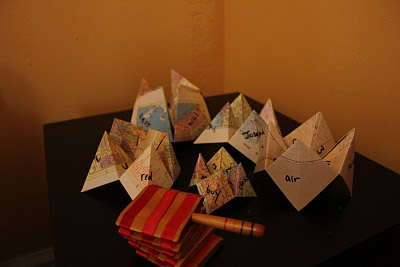 (Again, I apologize for the picture quality. As you can see in the top one, this installation ended up with a lamp to lend warmth to it, but I didn't get a proper close-up of it. Oh well.)

The installation for Sarah Ann Whitney was the most abstract of the six (with Emily Dow Partridge a close second). I wanted to highlight her youth, but didn't want to be too overt about it either. I had a Jacob's Ladder toy (which in finding this link I have discovered is probably an anachronism!) which references the Jacob's Ladder in the Bible. I also made five fortune tellers out of old maps, with the fortunes varying greatly from schoolgirl silliness (one featured desserts to eat) to commands (such as "compliment the next person you see" and "write a letter to that friend--you know who" to something, I hope, more profound (such as "don't be afraid to show your love" or "do not underestimate the power of a shared pot of tea". (In addition, I had ordered two antique keys from Etsy that failed to arrive in time, which I had hoped would allude to Joseph's hiding, Sarah Ann's visits with him, and all the secrets.)

While I tried not to hover over the good people who went through the exhibit, I was able to watch a few of them and noticed that most did not interact with this exhibit. I had hoped people would have found their fortunes and read those of others, but it rarely happened, although the Jacob's Ladder was picked up fairly often. If I have the opportunity to do this again, in this form, I'll have to figure out a way to make it more inviting to people to interact with the pieces. If you have any thoughts on this, please share them!
at 10:15 No comments:

Welcome to the inaugural of what I hope to be a long-running series of conversations with poets about single poems of theirs. If you have any thoughts on what or who you'd like to see in the series, please let me know. And I hope some of you will be inspired to continue the conversation in the comments.

Ariel Gordon is a Winnipeg-based writer whose first book of poetry, Hump, was published in spring 2010 by Palimpsest Press. How to Prepare for Flooding, a collaboration with designer Julia Michaud, is forthcoming from JackPine Press in 2011. When not being bookish, Ariel likes tromping through the woods and taking macro photographs of mushrooms.

Now, grab a fresh cup of tea and listen to Ariel read "Toddle" which appears in Hump, a mash-up of pregnancy-and-mothering poems and urban / nature / love poems that functions as an anti-sentiment manifesto of sorts.

Thank you for reading “Toddle” from Hump and agreeing to chat about it with me. Can you tell me a bit about the inception for this poem?

Strangely, though I remember the moments the poem records, I don't remember much about the crafting of the poem. Which is strange on two counts. Because I usually have a mental inventory of the changes a poem goes through or at least a computerized version of said inventory.

But, as the mother of a four-year-old, I apparently have too many random daycare documents and poems/letters with the word 'toddler' in them to be able to find the first drafts of this poem.

So I'm forced to rely on my memory. And all I remember about the crafting of this poem is that it's conjoined, a Siamese twin of a poem. Which means that it's composed of several short bits that didn't work alone but seemed to work when placed in close proximity. To hum, like finished poems do.

I don't usually write this way. Usually poems come relatively fully formed. Then it's just a matter of pruning, with the ones that work, or discarding, if they don't.

What I can tell you is that, since the girl appears to be approximately a year and a half to two years old in the poem, it was written in bits and pieces sometime between early 2008 and...December 2009, when I submitted the manuscript to Palimpsest. Heh.

One of my favourite parts of the poem is the end, the honey, honey, honey. I loved hearing you read it too, because I was so curious to how you would. It was different from how I read it to myself. Repetition can be hard to pull off well, but so effective when it does. What does repetition of honey in "Toddle" signify to you?

It is one of the nicest things anyone's ever said to me and, also, seemed to be the perfect way to end the poem.

I'm curious. How did you read it to yourself?

That's hard to convey in print, but I'll try. I read them softer than the rest of the poem, and much closer together than you did, in a wistful, soothing tone, if that makes any sense.

Hm. I hadn't thought of that. I read them the way I read them, with pauses between each of them, because I want the audience to come away with at least one honey. Since I usually read “Toddle” last if at all, and since the honeys come at the very very end, I pause.

You said that “Toddle” is composed of many short bits that work together, and that this is not how you normally write poems. I'm wondering how you made them work together. Did you work on sounds, images, and rhythm after choosing the pieces, or did you choose the pieces because of certain aspects that worked together? And if so, what stood out to you?

Looking over the poem now, it feels very 'buggy' to me. And not dreamy-dragonfly-pastoral buggy but live-with-us-urban buggy. Also, the first part of the poem - with its syllables battering against the rearview - makes it seem as though there's a swarm in the car and not a distressed kid. My kid.

That's all after-the-fact guessing. Because I didn't make any of those linkages when I was writing all the bits or when I was grafting them together.

The best I can do is that they all seemed to sing in the same key. Now, of course, I regret how parts two and three end on the same note - "your hair / lifts" is too similar to "Your hair & skin / gleaming in the sun / a small sting."

Sometimes, when I'm being careful on time, I cut out part three. Plus, three's hard to read. Especially the first line. And I never know how to read the middle stanza, with its parenthetical aside. It works fine on the page, I think, but I stumble when reading it.

I like how you describe the first section as a swarm. When I read it, it feels dense and I think it's because of the heavy "b" sounds. It works well, and I know how it is being stuck in a car with a toddler who needs desperately to fall asleep and fights it with as much noise as possible. The denseness of sound that fills the car.

I love "your face goes china, goes bone". Can you talk about that line at all?

Also, you mention that you sometimes skip the third section when you read it. I feel sorry for your audience! It feels vital to the flow of the poem. But I understand how some poems just are too difficult to be read aloud, although I don't think this is the case with Toddle. How do you choose your poems for a reading? What's the process? And why do you often end with "Toddle"?

I hafta admit that I love that line. It's a darling I didn't have to kill.

The most mysterious thing about babies is that they turn into waxworks when they fall asleep, as opposed to adults, who sigh and fart and snore and look like they've been stepped on. Anna is very pale and so she'd go very nearly translucent, like bone china or marble.

And this line was the closest I could get to the feeling of watching her in the rearview, all hopped up but also fascinated.

I pick poems for all kinds of reasons. How long I have. Who will be in the audience. How nervous I am. How bored I am with reading the poems I read when I'm nervous.

I like ending with “Toddle” in particular because it's very recent and feels like the best I can do at this moment in time.

It's also a good representation, I think, of who I am as a writer and what I like to talk about: the city, nature, my breasts.
at 16:40 2 comments: 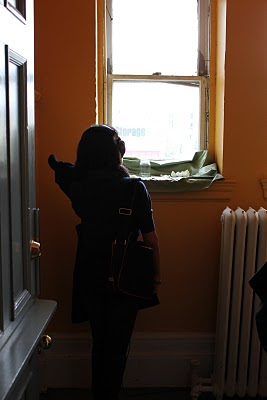 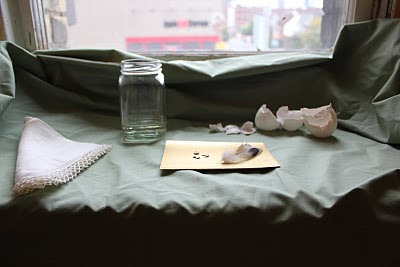 First off, isn't Olive Grey Frost a great name? Say what you want about Joseph Smith, some of the women he married had fantastic names.

This was the most literal of the installations, but because the poem is so short, I think it worked. Plus I liked how the bed bug recipe ingredients looked laid out like that. Sometimes simple is the way to go. The recipe didn't call for handkerchief, but when I started compiling objects that I might use, I found it and knew I had to use it somewhere. I almost put it in a different one, but it seemed the right balance visually and I liked how it was a reminder of the woman behind it all.
at 20:20 2 comments: