my wives have arrived 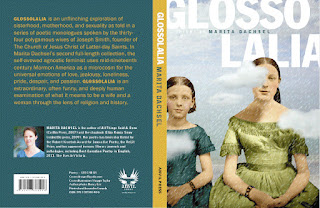 It is time for my wives to go into the world. I worked on this collection, writing and researching, for six years. During that time I moved three times to two different provinces and had three babies. So no, I wasn't working on this collection full-time, but the women have been with me all the time. They have haunted me.

Glossolalia is now available for purchase. You can buy it directly from my publisher Anvil Press here or request it at your local, independent bookshop.

I've started lining up some readings in March and April (more details on that soon) and will be popping up at some of my favourite lit blogs over the next few months, too. You'll see me at 49th Shelf, The Storialist, Jane Day Reader, and The Rusty Toque. If you'd like to add your site to the list, please email me (mdachsel [at] gmail [dot] com). I've also got a giveaway up my sleeve, too. Details on that when it's finalized.

I am so very excited about sending my wives into the world. I love these women, these poems. I hope they find loving homes.

inoculation against the difficult, liminal world

"It seems to me now that part of the compelling power of Sweet Valley High’s vision of identical twins lay not in the obvious assignation between our split selves (id and ego), but instead, in the ways in which writing itself—real writing, difficult, strenuous, hard-won, “under your own name” writing—always stands in an uneasy relationship to its enchanting, seductive, rule-bending twin. The one who always seems to win, to get away with it—as if, in the end, only a toss of a golden head or the sparkle of an aquamarine eye can carry the day. The theorist George Lukacs called the “entertainment novel” the “caricature” or bad twin of serious fiction, and in a sense, for me at least, that was both the allure and the potential hazard of ghostwriting mass-market books. I wanted, as long as I thought I could risk it, to stay in the pastel, exclamatory world of the light and the popular, the world of fast cars and faster verbs, the world where difference was traded for sameness and the blondes triumphed and the eyes sparkled and the parents stayed married and the brother stayed away “at college” and the paralysis was curable and anything and everything could be resolved by the final chapter. I wanted the machine of narrative to work the way popular literature has it work: difference going in one side, and out the other side coming the reassurance of sameness. The same people, the same formula. You can do this, the books hummed to me as I wrote them. You can do this, they hummed to the girls who read them. They promised a way of being. A kind of inoculation against the difficult, liminal world of the real. A world we sometimes know only in relation to the fantasies that counter it. The pastels that turn it gray, rendering it more ghostly than we would like. Or sometimes bear."

From The Ghost Writes Back by Amy Boesky, an excellent read about her experience ghost writing fifty of the Sweet Valley High books. (Oh how I devoured those books!)
at 10:44 No comments:

"she's never liked twilight, you know,
when it comes, it only confirms
we've failed at everything
again
it only arrives to insist
what a waste,
it says, I at least end things, I
understand perfection, deep
at its source it isn't power,
nothing so small, so edible
there, it is immaculate possibility"

from Dionne Brand's brilliant Inventory
at 21:31 No comments:

Glossolalia won't be officially released until March, but I recently saw that the fine folks over at Book Riot wrote some great things about it in a review that includes the excellent books Titanic by Billeh Nickerson and Salvage by Michael Crummey. Good company, no?

Brenna Clarke Gray aka dr b starts the review with, "Okay, you know when good art makes you uncomfortable in that deliciously squirmy way?" and ends it saying, "Dachsel’s mastery over multiple voices really elevates this collection to something special." You can read everything in between here.

(Many thanks to dr b and Book Riot for highlighting poetry!)
at 13:44 No comments:

The lovely Shawna Lemay asked me to contribute something to her newish website Canadian Poetries. Time has been tight on my end and while I have promised her an essay piece for later, I was thrilled that she wanted to post some work from Glossolalia.

I chose what might have been the most difficult poem for me to write, Emma Hale Smith. It took me six years to get her poem right, and it's a treat to see it all together like this. In the book, the four sections are spread throughout. So please, head on over and read it, then explore the site some more. Shawna is curating a wonderful poetry-focused experience.