Fashion, like religion, is easy to disparage, in part, surely, because a majority of the devout tend to be women. A style of dress, like a creed, may be freely chosen, or cruelly enforced. The design world has its mystics and charlatans, its tyrants and liberators. History and emotion are vested in the clothes we wear, and they shape our identities, individual and collective, even if we profess indifference to them. (Atheism, according to James, is its own form of religion.) “Women in Clothes” might be called, at least by a serious person defending it to herself, “The Varieties of Sartorial Experience.”
from "Caring About Clothes" by Judith Thurman

I'm not sure if it's because I'm on the cusp of forty, or if it's because I've felt like I've been on the verge of tears for months, but reading the New Yorker review of Women in Clothes made cry. The last line did it, and I wish I knew why.

A few months ago (was it a year? or more? time has moved at a strange paces for me lately), someone sent me the survey to fill out for this book. I was excited. I knew Sheila Heti was involved with the project and she is always interesting. I also love clothes. You may not be able to tell if you ran into me picking my kids up from school, but I love fashion. I love well made clothes, interesting designs, fine fabrics. I'm also sentimental about clothes. I have a dirndl I wore as a child that's waiting for my youngest to get big enough to wear. I have dresses I wore in my 20s that I'll never giveaway, nor will ever wear again.

I started the survey and was quickly overwhelmed. There were many questions, but it was more than that. My answers were long and very earnest. It was like therapy answering them, and I didn't always appreciate where they took me. I was afraid that I was revealing too much about myself and so I abandoned the survey.

Of course, I now wish I hadn't. Not because I want the world to know about my deepest feelings and shames about clothes and appearance, but because there is something powerful about being part of something greater than oneself, especially when it's a group of women.

Last night I had a conversation with a woman who is heavy into the rockabilly scene. She lamented how the scene was once about the music and being counterculture, but now it's so much about the clothes, and specifically how catty some can be, disparaging those whose cuffs aren't the right width or whose dress isn't the right brand. It's interesting, yet not surprising that there are those whose rules of dress become so rigid that they use it to shun, even in, or perhaps especially in, subcultures. We all have our uniforms. We all have a desire to belong. And we all, I believe, like to feel at times like we don't.

I haven't seen a copy of Women in Clothes yet, but I am looking forward to reading it because, even if I'm not part of it, I am.
at 10:53 No comments: 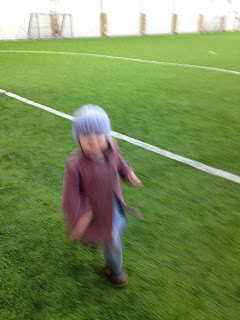 My youngest, H, will turn three in a few weeks. She is strong, determined, and feisty. She holds her own just fine with her two older brothers and is not one to be idle. It's as if she has a switch that says, why stand if you can dance? Why walk if you can run?

One of my favourite moments of the day, is the quiet at bedtime, where she crawls onto my lap and cuddles to sleep. I often read during this time, usually the only chance I get during the day.

Last night, she noticed I had a new book. She asked what it was. "Girl Runner," I said, showing her the cover.

"Is that me?" she asked, wonder in her voice.

Two years ago, I was a runner. Well, at least, I was working on becoming a runner. I took two running classes and ran my first (and only, ahem) 10K at 1:03:03. Then we moved, then life got complicated. I started again, but then life got in the way again. And then I tore ligaments in my knee last August (a camping injury!) and was in pain for almost eight months.

Throughout the summer, I'd been telling my husband that I really should/really want to start running again. It seemed so hard to take that first step back at it, but three days ago Carrie Snyder's Girl Runner arrived in the mail. I've been looking forward to this book as soon as I read about it. I adored her The Juliet Stories and have been looking forward to see what she would do with a novel.

All of this to say, I knew I'd want to start reading it straight away. I also knew that it was time to stop talking and get running, so the next day, the day I started Girl Runner, I dug out my running clothes, laced up my shoes and ran.

Well, saying I ran is a tad euphemistic. I ran and walked and wheezed and sweated a measly 3K. But I did it, which was more than I'd been doing for a long time. My calves are tight, but I'm planning on going again tonight. And then, I'll return to Aganetha Smart, Girl Runner.

Before we had children, even before we were married, my husband and I had many discussions about our future children's education. Nothing seemed as important. Home schooling them was an option that we talked about a lot. My husband was, and still is, quite taken with the idea. Before having children, and before my kids were school age, I thought about it quite seriously. I read some great homeschooling blogs and some good friends who had fantastic kids home schooled. But then I realized that it just wasn't for me. My boys thrived in group settings and I knew that I would soon grow resentful of devoting all my time to them, time that I could be writing, doing my own work.

Well now, thanks our province's teacher's strike, it looks like I have little choice. (Yes, I could send them to day camps, but we don't have the money to do that. And I'm at home with our youngest this semester, it just makes sense to keep them close.)

Our homeschooling is quite basic. I have them do math and reading every morning, and am trying to figure out how to keep up their French beyond just having my eldest read French books to my middle. I've also been reading Farmer Boy to them for the first time. I had read Little House in the Big Woods as a child and adored the television series, but hadn't read the series.

We are only a four chapters in to the book, but I'm fascinated with the school scenes. The antagonism of the older boys and Mr. Ritchie to the school teacher was a little shocking. It reminded me of the opening of Elizabeth Gilbert's great article The Last American Man:

Briefly, the history of America goes like this: There was a frontier, and then there was no longer a frontier. It all happened rather quickly. There were Indians, then explorers, then settlers, then towns, then cities. Nobody was really paying attention until the moment the wilderness was officially tamed, at which point everybody suddenly wanted it back.

Within the general spasm of nostalgia that ensued (Buffalo Bill's Wild West Show, Frederic Remington's cowboy paintings), there came a very specific cultural panic, a panic rooted in the question, What will become of our boys?

Problem was, while the classic European coming-of-age story generally featured a provincial boy who moved to the city and transformed into a refined gentleman, the American tradition had evolved into the utter opposite. The American boy came of age by leaving civilization and striking out toward the hills. There he shed his cosmopolitan manners and transformed into a robust man. Not a gentleman, mind you, but a man. Without the wilderness as proving ground, what would become of our boys?

For obvious reasons, this is a terror that has never entirely left us.


The idea that being classically educated is somehow unmanly, that being masculine (which in this patriarchal society is highly revered) means having a disdain for education. That somehow being a brute, using brawn over brains, was admirable.

And, of course, it reminds me of the current situation between the government and the teachers. The joy the Minister of Education and our Premier seem to have bullying the teachers. They aren't using physical force, but they are pressing intense pressure on them financially (no strike pay for the teachers) and trying to turn public support against them. It's working, unfortunately. The bullies have the media on their side, and the public, many who have the American mentality towards education, are quick to find fault with the teachers.

It sickens me and saddens me.

I want to live in a place that values education, ideas, and inspiration. A place that creativity and creative though is celebrated, not disdained. How can we live in a strong society if we don't value the people and the institution that teach and mould the next generation. They spend thirteen years of their lives in public education. Don't we want to give them the best?

In Farmer Boy the teacher stands up to the bullies with a bull whip, literally beating them out the door. I'm trying to think how this can be a metaphor, as physical violence is not the answer, but I can't. I feel beaten down by this strike, by our government's attitudes towards public education. How do we fight the more powerful? How do we bridge this gap?
at 11:02 2 comments: