this ridiculous and unworthy measure of literary value

"I believe that when W.G. Sebald makes reference to a historical event of which we are ignorant, we readers know that the lack is ours. But that is not true when we approach writers who engage with Lebanon, Sri Lanka, China or even our own First Nations history. Those writers are expected to be the explainers, interpreters, educators, spokespeople. Their literature is partly judged by their ability to balance all these roles: their literary success depends on the success of “our” education. Isn’t it time to laugh, uproariously, at this ridiculous and unworthy measure of literary value?

The world is large. As readers, let us grow into it."

from Madeleine Thien's essay in the Globe and Mail about Ma Jian's The Dark Road.
at 11:17 No comments:

a room of my own

I've been interested in faith, spirituality, and religion for a very long time. Over the last few days, I've been trying to figure out when that interest started. At first, I thought it was way back in grade seven when I wrote an in depth essay on creation myths from around the world. It was extensive and I found the research fascinating. I loved it and I think that might have been the start of my love for research (thank you, Mr. Westie!).

But I think my interest in faith may have been earlier. In elementary school, my bestie was the daughter of a Lutheran Pastor and I occasionally went to their church and Vacation Bible School. Their worship was slightly different from my Anglican upbringing, and it was enough to make me start noticing differences and questioning why those differences exist.

Unlike most Anglicans, I wasn't baptized as a baby, but when I was around ten years old, my peers were starting their first communion lessons. I wanted to join in, and I will admit part of wanting to do this was so that I could sip wine every Sunday. I had to be baptized to do my First Communion, so they let me take the lessons and I think, if I remember correctly, that I was baptized and had my First Communion on the same day. At the same time, many of my peers were also on the track towards Confirmation. I knew that wasn't something I wanted to do, and not because there wasn't any food or wine related perks to it. Even then I understood that being confirmed to a church was the same as marrying the church, and I knew I was not ready for that kind of commitment.

Over the years, I've researched many churches and faiths. It is now less a search for the right fit for me (though, there are times that it is), but rather it has become more an study of faith and spirituality. I'm very curious about what people believe in and why. What the commonalities are, what is wildly different. I'm especially drawn to fringe sects and the more unconventional beliefs.

Even before starting on Glossolalia, I had been reading about Mormonism and other religions that started or flourished in the 1800s America. I'm especially interested in the role of women in these new sects. After six years of researching and writing about early Mormon polygamy, one would think I'd be ready to move on to something else, but I've found myself returning to that time and place. At first I was frustrated with myself. I don't want to pigeon-hole myself as a writer. I owe it to my craft to push myself in form and content. Plus, I thought, if I was going to do all that research again, I should get something for it, like a degree.

For about a month, I was actively looking into doing a graduate degree in Religious Studies. I even knew what the title of my thesis would be, but ultimately I decided against it, for now anyway.

About a month ago, I learned about the Artist-in-Residence fellowship UVic's Centre for Studies in Religion and Society. I applied with a project that I had been thinking about since working on Initiation Trilogy and whose subject matter I've been interested in for a very long time, over a decade. I hadn't talked about it with anyone, even my husband, until putting together the application. It was an idea that needed to ferment for a while.

I'm thrilled to announce that the good folks at CSRS thought it was a good idea, too, and I have been made the 2013/2014 CSRS Artist-in-Residence. I'll have an office in their Centre from September 2013-August 2014 and I hope to be there at least three days a week. I'll be researching, writing, and, this is really the best bit, I'll be part of their community, where a cross-pollination of ideas and disciplines is paramount. To say I'm excited is an understatement.
at 10:21 7 comments: 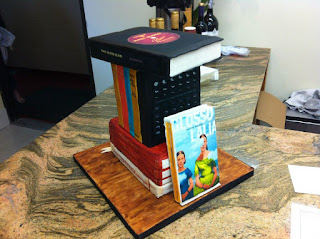 On Tuesday night, I had one of the most delightful literary experiences to date, and not only because of the cake pictured above. (Yes, that's a cake! It was huge and delicious.)

As a writer, I hope to launch many of my books over my life, but to launch a bookshop, especially in today's environment, feels like a once-in-a-lifetime opportunity. The much loved Russell Books in Victoria just opened their newest store exclusively featuring rare and antique books and it's so beautiful.

The evening itself was fun. There were tonnes of giveaways, cake, wine, and I had the honour to share the stage with Esi Edugyan and Steven Price. I have to say, that they are both so kind, gracious, and charming, sitting with them I forgot what superstars they were until they had their turns to read. They're fantastic writers and readers, which made the evening even more special.

The crowd itself was huge. One person counted ninety-eight (98!!) people and they were attentive and generous. Vanessa Herman will be hosting a reading series in that space every second Tuesday of the month. I'm guessing it won't always get the numbers we got that night, but if the audience is similar, it's going to be a stellar series.

One woman in the audience not only bought my book (always a treat!) she has already read it and reviewed it in two(!) places: her blog and on YouTube. I'm incredibly grateful and a little bit stunned by her generosity.

I walked away with a gorgeous antique book, signed books by Esi and Steven, cake, flowers, and lots of Russell's swag: bag, t-shirt, pen, and mug. But the best part was the warm joy that came from that evening. What a community, what a store. I feel so lucky to have been a part of it.

(The photo above was lifted from Russell's FB page. I'm not sure who took it, but my guess it was Will Johnson. You can see more photos from the night at Will Johnson's blog which you should explore a bit, he's got some great interviews there.)
at 11:05 No comments: 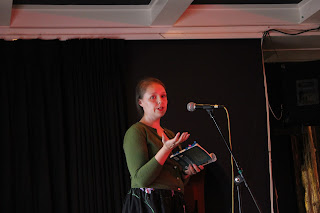 I'd done a couple readings from Glossolalia in March and April, but my first official launch was at the end of April with Dede Crane and Jay Ruzesky. I may be a little biased, but it was a great event. Bill Gaston was the host and he's absolutely charming. Dede and Jay were both engaging and entertaining readers and made me elbow my way to the front of the bookseller's line to buy their books. (Confession: I didn't really elbow my way to the front, but I wanted to.)

The room was packed and I had a few good friends in the audience. The biggest treat for me was that my husband was there (and he took some pictures from an unforgiving angle (we chose a poor place to sit), but I have pictures at least). He hadn't seen me read since 2007 and he was such a important part of the writing of Glossolalia. I'm so glad we could celebrate together.

I have one more reading in Victoria in the near future, which I'm very excited about. The much loved Russell Books is opening a new venue space that will house their vintage and collectable, and I'll be reading with literary superstars Esi Edugyan and Steven Price to launch it. I feel incredibly honoured to be part of this event, and not only because there is promise of cake. 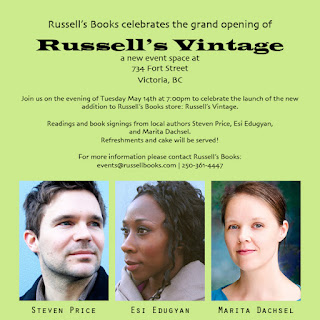 Micheal Laverty, you have won a copy of Glossolalia!

Thanks to those who entered and helped spread the work.
at 11:05 No comments:

What She Said: Claire Messud

'“Of course, you wrote that for the money,” even a few good friends told Messud, assuming she’d finally taken Hitchens’s advice (or maybe followed her husband’s haute-populist prescriptions). In fact, she says, those short chapters and quippy sentences were all she could manage between feedings of her infants. “I had a memory span about as long as the lines in a school play,” she says. “It was like a book by somebody else. The idea that there was any plan or strategy—” Well, she did try something new. “I had never been very interested in plot,” she says. “I felt I should practice drawing hands.” But gone were the days when she went over her sentences so many times that she memorized them. “It’s actually a good thing not to be able to recite every last line,” she says. “Lighten up a little!”'

Claire Messud on the writing of The Emperor's Children in an interview with Boris Kachka in http://www.vulture.com/2013/04/claire-messud-and-james-wood-on-the-woman-upstairs.html
at 16:02 No comments: