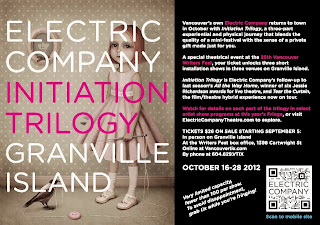 We begin with three recent, inventive and provocative books of poetry joined by themes of feminism, sexuality, and the cultural foundations of identity, by some of Vancouver’s most exciting writers: Jennica Harper (What it Feels Like for a Girl), Elizabeth Bachinsky (God of Missed Connections), and Marita Dachsel (Glossolalia).

Appearing in three parts across three venues as a featured event at the International Writers Festival as a part of their 25th anniversary, Initiation Trilogy celebrates the vitality of the local literary scene as well as the creative potency and invention that has identified Vancouver’s independent theatre community as national leaders in the form.

In the tradition of such celebrated Canadian installation artists as Janet Cardiff and George Mueller, the viewer is given an intensely active role in the creation of the experience. We’re inspired to combine this aesthetic quality with theatre’s capacity to tell a strong story within a communal or group experience wherein we break down the isolating components in our culture and encourage contact, collaboration and community.

"...the innovation, the provocation, the ingenuity of the endeavour must be applauded and, I hope, continue to be pursued by these artists and emulated by others."
The Globe and Mail

"You know how a lot of poets do that irritating floaty thing when they’re reading their poems, how they use that I-am-a-priest-in-the-religious-order-that-worships-my-own-sensitivity voice? Nobody in Initiation Trilogy does that—which is one of the many reasons that this show is such a refreshing celebration of the power of poetry. Not everything works, but the things that do are thrilling."
The Georgia Straight

"Initiation Trilogy adds a whole new dimension to poetry. It should always be this sublime."
Vancouver Courier

"It is a thought-provoking and uniquely staged evening of art, at times very moving and sometimes a little elusive."
The Charlebois Post