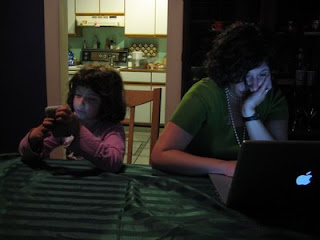 Deborah holds a B.A. in Film and Communications from McGill University and an M.A. in Film Theory from UBC. After university, she quickly realized that working at Starbucks was not what she had in mind and began teaching film at UBC and various film schools, eventually parlaying her love of writing into a freelance career. Deborah has written for such shows as: What About Mimi, The Immortal, Guinevere Jones, Silverwing, Braceface and Robson Arms as well as for the gaming industry. She won a 2000 NSI Drama Prize for her short Mr. Reubens Goes To Mars and a 2004 Praxis Screenwriting Competition for her romantic comedy feature Psyched. Love and Other Dilemmas, Deborah’s first feature, hit theatres in February 2008. Most recently she was Executive Story Editor on the YTV series Zixx: Level Three and is currently a member of the on-line comedy troupe Rantingparent.

I don't think that I distinguish between the two. I am both. Depending on what I'm doing, I'll go into either my writer brain or mom brain as is appropriate but even then, I am always conscious of both aspects of my life.

I've wanted to be a writer for a very long time but always knew I'd be a mother. For me, in both cases, the reality is far more challenging - and rewarding - than the fantasy.

The "mother " fantasy probably didn't have much more depth to it than the actual fact that I would have kids that I would love. It certainly couldn't prepare me for the depth of feeling that hit me the moment I held my daughter in my arms the first time. Because at that point, she was a real person, not someone I was carrying whose identity I was speculating on. And it's been both incredibly joyous getting to know her, and sometimes incredibly frustrating when she acts as stubborn as I can.

Writing seems to mirror that process. Again, the fantasy was something very vague and probably involved penthouses in New York full of glittering people. The reality is it's an incredible rush and yet it can also be really painful "birthing" these characters. And while I might have a similar experience getting to know the characters I create (both the joy and the frustration when they don't behave as I would like...) at the end of the day, nothing comes close to my real little girl who challenges and delights me at every turn.

I guess as long as my child is happy, curious, full of life and love, then I'm doing okay as a mom. I can hang out with my daughter or hear her laugh and think "yeah, I'm doing a good thing." I don't think I ever went into being a mother with any set of defined goals as to what being successful would mean. I didn't actually think about success or failure as a parent. Every day is a new day and if I do measure success, it's on a moment to moment basis. Success as a writer is far more elusive and something I struggle with. Maybe my ego isn't bound up in my child the same way it is in my writing abilities ? I'm questioning right now whether I would ever actually feel that I was a successful writer.

I don't have a set schedule. In the early days of a project, I'll spend a lot of time just thinking about it, and scrawling notes down as I go through my day. Then, as it becomes more fully defined in its first stage, whether that's a proposal or an outline or a draft, I get obsessive. All I want to do is write. I write in every spare second, around all my other obligations. Sadly, my husband and daughter have learned that when I'm in that phase, they need to yell at me for a few minutes to get my attention and snap me out of my zone. That's pretty much been my process from the beginning.

It hasn't changed what I write in that I don't regard any topics as taboo now just because I am a parent, but it has added to my wealth of material. I'm part of an online comedy troupe called rantingparent, and I definitely wouldn't be able to play with those guys if I wasn't a mom. Absolutely it has changed when I write. Now that my daughter is in school, I can get a good four hour run working, but she still needs to be picked up and ferried to all her classes or playdates. And funnily enough, she also likes to be fed at a set time.

How aware is your child of your writing?

Extremely. Aside from losing me to "the zone", my daughter also loves to tell stories (god help her). From a very young age, she's been interested how stories work: structure, heros journey, comedy. We have great talks about the craft of storytelling. And she knows that there are things I write that it's not appropriate for her to read.

I love that you have talks with your daughter regarding craft. I think you only need to be worried when she asks Santa for her own copy of McKee's Story . But I am curious to how you deal with her wanting to read what's not appropriate. Is it a "when you're older" scenario? Or do you talk about it more in-depth? And is inappropriate because of language or content?

Appropriate, for me, mostly revolves around content. I really want my daughter to be a child as long as possible. So I'm very aware about her getting "sexualized" too young. Bratz are banned in my house (probably the only thing with an active ban). If I think something might be fine developmentally but potentially scary to her, I get her opinion. She's pretty clear about drawing boundaries for herself. For example, she just recently read the first Harry Potter book. And she really liked it so she started the second one. But very early in, she handed it back and told me it was too scary and she'd read it when she was older. There is so much wonderful literature for her to read, that we haven't yet had a fight about something she wants to read that I don't think she's ready for. She's pretty happy relying on my suggestions or asking librarians.

I just need my computer and maybe some good music. And of course ideas. I get so sucked into my work that I can work around a house full of playing kids, a blaring television, whatever.

I've always been envious of people who can write in noisy situations. Were you always like this (writing in cafes, etc.) or has this evolved since your daughter was born?

I've always been able to write anywhere. And always enjoyed listening to music as I write. I remember a friend of mine telling me that when her daughter was born, she kept the house so quiet that her baby would wake up at the sound of the refrigerator turning on. I knew I definitely didn't want that and made sure that there was always some kind of noise in the house for my daughter to get used to. That also meant that I was writing through that noise.

You have a lot of free time. Stop wasting it.

I'd like to think my pre-child self would comment on how great I'm doing and how smashing I look but she'd probably just make some sarcastic comment about me.

In my particular situation, with the help of a very supportive family, I've been able to pursue this crazy dream and still totally be there for my daughter. She's never been in daycare or had a nanny. If we had another child, that would most likely change. Either that child would have a different care experience or more likely, I'd have to give up my writing and maybe just enjoy it as a hobby. I'm too selfish for that, but there are definitely moments of regret that I don't have another one.

Does it have to be an either/or situation? When I think back on it, it was both. It's still probably both and my daughter is grade one.

Well, birthing a baby is only about 24 hours of pain, whereas I've had projects take 5 years to come to fruition so I'd have to say way off.

Put them all together and you get a typical day... In all seriousness, I admire my female friends who are writers; who like myself, continually struggle to be true to their muse and be there for their kids and no matter how exhausted or how many jokes they crack, wouldn't give up either one. Women like my rantingparent cohorts Stacey Kaser, Jude Weir, Alison Kelly, Deb Williams or my friend Gillian Jerome, who along with her partner Brad Cran just won the Vancouver Book Prize for Hope in Shadows.
at 06:00