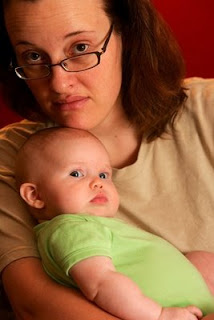 Ariel Gordon is a writer and editor based in Winnipeg. A hand-made, limited-edition chapbook entitled The navel gaze recently appeared from Kingsville ON's Palimpsest Press and occasioned a tour with fellow poet Kerry Ryan to Saskatoon, Edmonton, Regina, and Prince Albert (in that order).

I’m Ariel. Anna’s mum. (Anna being the two and a half year old rampaging over there.)

I’m just me. But I will admit that I’ve worked a lot harder on my writing, year in and year out, than I did to conceive my child. So pregnancy/mothering is/was new. Or, after two and a half years, new-ish.

I was one of those people who said that I didn’t need to have children to be satisfied as a person. But I got pregnant and had a child and some of the moments I’ve had with her have been as good or better than anything else in my life so far.

I’m pretty sure I need to write to be satisfied as a person.

The two intersect in that I know that my writing life couldn’t take another child. So we’re not having any more. But that’s my negotiation and my life. I couldn’t begin to say what another woman writer might need in order to write.

Neither parenting nor writing is a bad way to spend a life.

(I’d still like a book or five to my name. But that’s just book-lust talking.)

Why is that 'just book-lust' and not ambition?

It’s my way of hedging my bets. Because I am both intensely ambitious and also okay with spending my life writing and not ‘getting anywhere’ with said writing.

Book-lust is also a hallmark of emerging writers. They/we/me tend to think that all their problems will be solved by books, specifically books with their/my name on them.

I should have gotten childcare of some description during the last few months of my mat leave, but I didn’t. I was being paid to be at home, taking care of her, so it didn’t seem reasonable to foist her on someone else. But I think I would have been happier with an afternoon or even a day to myself a week during those last few months.

Now that we’re out of that first year, mostly, Tuesdays are my writing days. My mother-in-law takes my daughter for the day, so it’s even free. Sometimes, I manage to get another day a week, by paying the nice hippy lady who takes her during the days I’m at the bookstore where I work part-time for an extra day.

But I will admit that when we’re too busy or my mother-in-law is busy, my writing days are sacrificed. But I get dangerously crabby without my writing days, so they’re pretty short-term sacrifices.

I’ve never written such personal stuff. And after writing a book’s worth of poems about being a parent of a baby, I’ve embarked on a new writing project about absent parents. It scares the shit out of me (a part of me still yelps: why oh why?) but it seems to be what I need to write.

I think our best work comes from what we're afraid to write. What is it about the subject of absent parents that scares you so much?

Because taking the time to write about absent parents seems to mean absenting myself, at least to some degree, from my daughter’s life.

Partly because I don’t want to use my writing as a stick to beat my absent parent with. Because I’m not sure what the point is, bemoaning his absence. Will it help my siblings and me? Will it help anyone else?

Because I want to be fair and I’m not sure I know how.

Because being an absent parent is so gendered and I hate that. I hate that different roles and different expectations are assigned to men and women, especially around parenting.

The phrase that I return to with this project is that I’m “going out for a quart of expressed milk.”

How aware is your child of your writing?

She knows I’m “at work” when she’s in care. But she doesn’t know what writing is, besides that I make marks on the page and seem to think they’re important. And that she can’t make those marks herself yet. She’s also fascinated by my computer, because she perceives that to be an object of power.

I need a wife.

Funny yet true. I know I've said similar things. I think of Pierre Berton who had seven children and published over 50 books in his life. I really don't believe he could have done that if he was the mother. But I do wonder if we really want that wife? Don't we just want someone who will manage the home--clean the house, cook meals, etc.? Do you need a wife or your husband to take on more domestic roles? I guess I worry that we sell ourselves short as wives when we imply that our main role is a housekeeper.

Sorry, partly that’s an in-joke. Because I never use the word ‘wife’ to refer to myself, partly because my partner and I aren’t married but also because of all its icky associations.

But really, I struggle, just like my mother struggled, with being ambitious but still finding myself responsible for most of the household gak.

And although my partner is mostly a useless tit when it comes to keeping house and home together, the reality is that the room of one’s own dilemma won’t be resolved until men and women receive the same training in householding.

In the meantime, my partner has tricked me into loving him (and does his share of the childcare), so…I have to live with it.

And tell him what to do.

I would say, “You have no idea how your life will change,” like someone about my age with two children said to me when I was obscenely pregnant and on my way into a movie. And I’d resent myself for being condescending, like I resented that person. Of course I had no idea! (But still, he was right, I had NO idea…)

Sometimes I wish that I’d let myself take a maternity leave from my writing life as well as from my working life. But I was so determined not to have the essential part of myself (which I flatter myself to be my writing) be subsumed by my new role.

So I kept on reviewing books, even though the reviews editor was reluctant to assign me anything (this was after writing over 30 reviews for him, all to deadline). But in order to get the reviews done, I had to get what I call “downstairs babysitting.” My mother-in-law would come over and look after my daughter while I went upstairs and typed furiously. And when my daughter made her hungry squawks (she absolutely refused to ever take a bottle), I would race downstairs and feed her and then go back upstairs for another session of furious typing.

And I wrote short short poems, the shortest and sparest I’ve ever written. Because it was all I had time/space for, in the blurry blur of the first year of my daughter’s life.

In the end, I wrote most of a manuscript during this period but it wasn’t particularly relaxed. So I can’t decide which would have been better. To have been completely present (and not now have the poems) or to have absented myself a little bit (and now have the poems)?

My scientist mother was a workaholic, so I have always excelled at keeping myself busy. At making my life ultra-full. So my challenge, before and especially after baby, has been to empty my life. In order to write AND parent, I’ve had to get rid of most everything else. So I’ve cut way down on freelance writing. Not because I couldn’t do it, mind you (sorry, I’m still talking to my reviews editor…). Because I chose to devote the time to my creative writing.

I’m not sure if the haze ever ends. Life is sort of hazy, isn’t it? And child-bearing/rearing seems designed to fill you right up…

To sum: it was both.

I’m not sure. It seems too tidy a comparison. And neither writing a book nor having a baby is tidy.

Until I had a child, it didn’t occur to me to admire writing mothers. I deeply appreciate some of the examples I’ve found in my reading since, like Robyn Sarah’s in Double Lives (MQUP, 2008) but I most admire the writing mothers I know a little bit. Like Gillian Wigmore. And Shawna Lemay. And you.

All of us struggling a bit. All of us writing when we’re able. All of us (again, I flatter myself), succeeding just enough to stay sane. To stay whole. 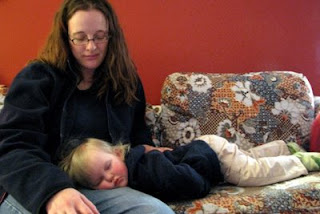 I've always felt this too.

Yes, Ariel is great, isn't she? I hope she becomes insanely famous simply so everyone can read her quips on life.